When I randomly started played Persona 3 Portable (P3P) a couple months ago, I thought I might immediately start up another playthrough series here. Y’know, like we do. I thought I’d offer up regular updates on my progress, thoughts on the game itself, and reactions to whatever it happened to offer in the moment. But, life doesn’t often go as planned, and sometimes, neither do games. My first few hours with the game were confusing, and the next handful weren’t much better. Not that the game itself was bad, it was more a case of me failing to grasp P3P’s concept. Perhaps it’s best if I begin at the beginning.

My history with the Persona series goes about as far back as I my relationship with what I had for breakfast this morning. Which is to say, it’s minimal. Several years ago, I came close to picking up Persona 4 for the PlayStation 3 on a recommendation, but I never followed through. Before that, I played a handful of baffling hours of Shin Megami Tensei. I recall little from the attempt, only that I talked to lots of demons and had trouble navigating a city map. Maybe I should have tried harder. In any event, it really wasn’t until Persona 4 that I took an interest in the series, if only a fleeting one. When Persona 5 came out last fall, it looked and sounded too good to ignore. But even with reassurances that I could easily play Persona 5 without any prior knowledge of the series, I couldn’t, because that’s not how I operate. If I’m going to jump into a game series that has a past, I’d like to experience at least a portion of its past for myself. Hence, late last year when I needed something new to play during my work commutes, Persona 3 Portable became that “something new.”

The question of why start writing now, now when I’m some forty hours into the game, as I already alluded to, is one of comprehension. While I know of the Persona games, I knew very little about their actual gameplay when I started P3P. So yes, I stumbled through the dozen hours or so, slowly, in ten to twenty minute bursts during my train rides. It was really only after I had defeated my second Shadow (more on that soon), that I got it. That I understood why the Persona games are so adored and so addicting. And that’s when I knew I could start writing.

Was that long-winded introduction to nothing? Possibly. Because though I’m nearly forty hours into the game, an hour count that would mark most games done and gone, I can tell that I’ve only scratched P3P’s surface. It’s story so far is fascinating and bizarre.

I’m playing as a high school boy who I’ve named “Jin.” Jin’s parents died when he was young, and he has returned to his hometown where he attends school. Jin’s talent to summon “personas” is made clear early on, and he meets up with other students who have the same ability. Together, they’ve formed a group called SEES, which is studying something called the “Dark Hour.” It’s only during this time that Jin and his cohorts can use their powers to fight “Shadows,” which appear in a structure called the Tartarus. Each time a full moon rolls around (every month), a powerful Shadow appears and must be defeated by the team. And what do Jin and his friends do when they aren’t evoking personas? Why, they’re going to school, making new acquaintances, going to the mall, maybe working a part-time job or buying new weapons from the police or items from the pharmacy. Y’know, like kids do. 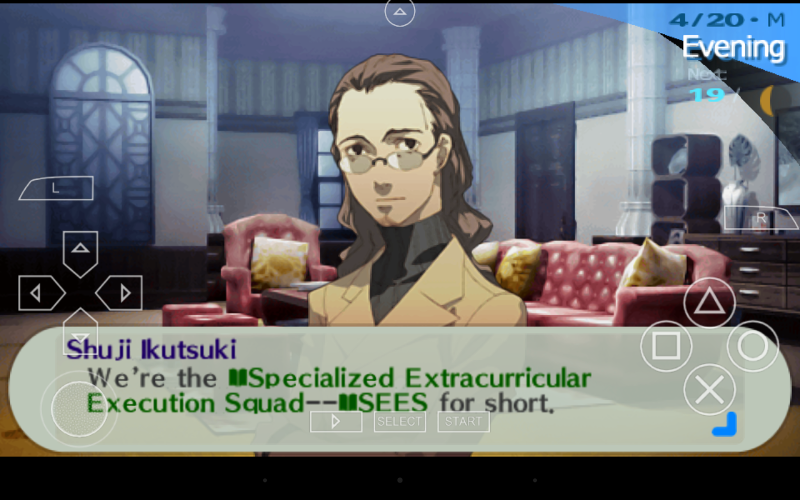 I jest, but Persona’s blend of turn-based combat and social management is its hallmark. And I have to admit that I didn’t buy it at first. Or rather, I didn’t have a full understand of how the two could blend. Early on with the game, I found myself edging more towards making Jin a social butterfly over a combat master, because it’s easy to want to explore Iwatodai, the game’s setting, and talk to all its inhabitants. Making new friends proved interesting, and I quickly latched onto a student named Kenji. Together, he and Jin built up a solid relationship, while I was also building up something called a “social link.” As I discovered only once I pulled myself away from being a high school student, these social links proved vital in the creation and maintenance of Jin’s personas, of which he could hold several, over other SEES teammates who could only possess one each. My SEES friends were also pretty good about bugging Jin to improve his and their skills in the Tartarus. After all, everyone had to be ready for major fights during those full moons.

What I’m getting at is that, for me, the first forty hours of P3P have felt like a grand tutorial. And now, with each new day that I play (quite literally, as the game keeps track of days and events), I become more comfortable with, well…with managing everything. But what’s awesome is that I’m not necessarily tied to doing only one thing on any given day. If I feel like giving combat a go, I can head to the Tartarus and explore as many floors as I want. (Dare I ask how many floors there are total??) Oh, and by the way, the turn-based combat is super fun! Playing around with different personas and team combination keeps things fresh and lively.

But if on some evenings after school or weekends I want to roll around the mall or go have some coffee. I can do that do. And the game offers players full control over how they want to build up their social links. As I’m still getting the hang of operating personas and fusing them, I haven’t been going at the social links with much of a plan, and at this point, I don’t know that I’m going to much formulate one moving forward. But we’ll see.

I could discuss plenty more, from the story’s overall darkness and twistiness to Jin’s teammates (wacky Junpei is my favorite, even if he can be kind of an inadvertent  jerk sometimes), but there will be more P3P posts to come. Suffice to say, this is only the beginning, even if I am on the 83rd floor of the Tartarus. To round out these posts, and as a way for me to track my progress, I’m going to offer up a list of my current stats. Not all P3P stats I could list (because there are many), but only the ones most pertinent to my character. Here goes the first round!