A couple factors played into my decision to continue riding the Fallout wave with Fallout 76. Among the biggest was words from regular gaming bloggers. While most big gaming sites had seemed to give up on the game, many fellow game-players who had invested in the title seemed to really enjoy it, at least as far as it went with the words they put on their blogs and social media. While Fallout 76 wasn’t a perfect game, they often wrote, it was no longer the unplayable disaster it was at launch in late 2018, and it provided varying means of enjoyment. Maybe those means came from helping others. Maybe they came from building the most elaborate encampment. Maybe they came from working with a team to take down a big monster. Whatever the means, lots of people, it seemed, were liking the heck out of Fallout 76. So hey, maybe I’d like the heck out of it, too.

With the help of an XP event at the end of June, I managed to reach a significant milestone for my character: Level 20; and, I hit a total play time of about thirty hours. Since I must admit that I went in to the whole row thinking that I’d barely make it just a few hours before throwing in the controller, let alone thirty, I’m rather pleased with the achievement. With it, I thought it might be a good time to do a review. However, as Fallout 76 is a changing and growing MMO, and since I’ve only ventured into the game’s “Adventure” mode as a duo (me and my husband) while actively choosing to ignore both PVP (“Survival”) and battle royale (“Nuclear Winter”), any review I could offer would be rather one-sided. So instead, I’d like to recount some of my most notable Fallout 76 experiences so far.

By the time my copy of Fallout 76 loads up all of its data (SO MUCH DATA), it’s late in the evening, and I’m tired. While my other half is gallivanting his way through the ravaged forests of West Virginia (I catch a pop-up saying he’s reached level 5), I decide to at least create my character so I can join him the next day. I go through a very Fallout 4-ish character creation scheme (with a few notable differences), and I end up with Amelya. She’s quiet, tough, and extremely clumsy – her nose scrapes are not due to a rough scuffle, but rather because she accidentally walked into a door frame while looking for her glasses. D’oh! I take a little time to explore what remains in Vault 76 but decide that I’d much rather go to my real-life bed. So I log off.

I then double back thinking Did my character save? I log back into the find that, nope, it did not. So I go back through character creation again, make Amelya again, and this time, I actually make my way outside after following the first mission, “Reclamation Day.”

And then the game suddenly bugs out and decides that it doesn’t want Amelya in the outside world. I’m there staring at a black screen with the load/save icon stuck mid-animation while heavily sighing.

I reset the game. I go back through character creation again again, make Amelya again again, and go through the “Reclamation Day” mission again. This time, thankfully, no bugs occur, and I walk a little down a nearby path just to make sure I can actually function. By now I’m really tired and grumpy, so I log off with the numbed hope that I won’t have to make Amelya again, again, again tomorrow.

The game starts up without issue, and yay, Amelya is safe and sound!  She’s not quite in the same spot that I left her, but at least she’s not glitched. With the few bare necessities, I had gathered from Vault 76, along with a mission (“First Contact”), I start exploring Appalachia. I decide that I want to be at least level five before teaming up with my husband. He agrees that I should get my bearings in the game first and offers up some helpful advice about getting started. My main goal is to find the Overseer’s C.A.M.P (Construction and Assembly Mobile Platform). I head into the wilds, explore a few abandoned cabins, and figure out how to fight melee, since it seems like a good idea with ammunition in short supply. (I was never much into melee in other Fallout games.) Playing solo for a brief time, the flavor of the game remains very true to Fallout. It’s rich with lots of nooks and crannies to explore, inhabitants’ notes to find, looting galore, and plenty of enemies to fight or ignore (as long as they ignore you). I honestly don’t notice the lack of NPCs at this early stage, as I’m too busy just acclimating to the world. Along those same lines, even though you can see other players on your map and in your instance, I never encounter a single other soul. Not a one. I eventually find the Overseer’s C.A.M.P. and learn the basics of its system.

My next objective leads me to the nearby town of Flatwoods. This is where I learn of a number of things that are very un-Fallout-like, as in the importance of eating and drinking. As well, since Fallout 76 takes place only twenty-five years after nuclear war, the world is incredibly irradiated. So just about anything and everything can pass along radiation to you in some manner. Crafting the right gear and cooking the right food are therefore of the utmost importance…neither of which sound all that exciting to me. Then again, I willingly started up this survival MMO, so the joke’s on me, I guess. But all in all, the game’s enjoyable. The world’s not as desolate as I thought it would be. While there are no human NPCs, there are robots with which you must interact; and the story progresses in a way that’s just compelling enough to make the world feel alive. 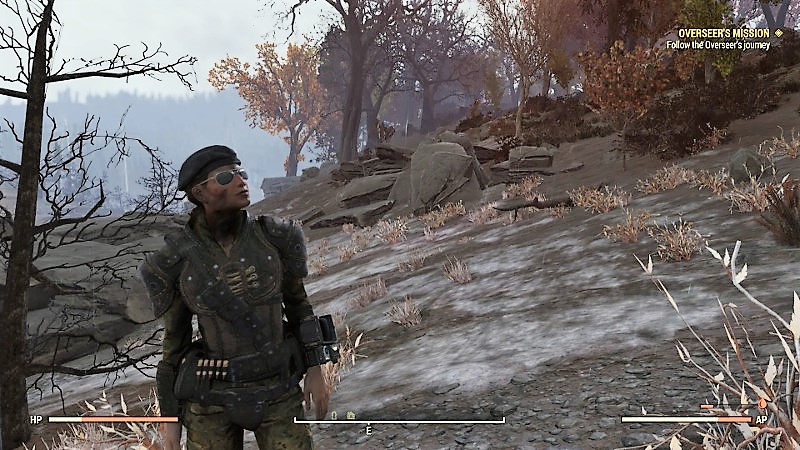 One of the things that irked me with Fallout 3 & 4, and New Vegas, was the way quests were handled. It was far too easy to gather up numerous missions all at once – main, side, and miscellaneous – and end up with a map full of markers and no clear direction. Well, upon teaming up with my husband in Fallout 76, it quickly becomes evident that the game proves to be no different, and even worse in that regard. While playing solo, I had picked up a number of different Responders quests. (The Responders were the first to help newly-freed vault dwellers.) My husband, however, had ignored the Responders story line and had instead collected a host of different missions. When I group with him as the team leader, his quests suddenly become my quests, and the entire right half of my screen fills up with quest text. It’s stupidly overwhelming. Interestingly, deselecting quests in our Pip-Boys don’t eliminate the wall of text. Instead, we clumsily figure out that you have to “stop tracking” them on your map to make them go into hibernation. But even then, some quest text remains, even if their markers aren’t active. It’s easy to ignore, I guess, but my mission management inklings gnaw away at my sense of control. I manage to impose a sense of self-therapy once we decide to ignore the quest text and simply explore.

And boy oh boy, did we ever have a good time! While there aren’t any classes in the game (too bad, that), I fell in line with a tank-type, drawing enemies towards me and whacking away at them with my trusty axe. While he became the ranged healer, since he had gather up lots of ammunition and healing supplies. Our play style worked for us, and it became crystal clear that multiplayer is the game’s strong suit. Maybe the lack of other humans had something to do with it, but it just felt really good exploring and discovering Appalachia with another person. (I imagine the feeling would be heightened while playing with the group.) Speaking of which, at several hours in, we finally encounter another random player. We had just discovered a farm when they showed up. It was little jarring at first, but no funny business occurs. They’re just there looting along with us. We go off on our merry way and so do they. It bears mentioning that I can count on one hand the number of other players we’ve encountered in thirty hours, and we’ve never had an issues. They’ve all been high-level, helpful players. We’ve not had the experience of anyone dropping us free loot (that’s probably more likely if it’s clear you’re playing solo), but in a couple instances, kind players popped up to help clear out difficult rounds of enemies while leaving us the spoils. Maybe they send a “thumbs up” our way, maybe they move on. Either way, thanks, nice people.

There’s plenty more to discuss – I haven’t even complained about the scaling problems I encountered, i.e. stumbling across high-level enemy hoards as a very low-level player downright stinks; or that the lack of “you need to be [x] level before completing this quest” indicators has led to some extremely frustrating moments — but I’ll leave things on that positive note about the players. Indeed, I do have to agree with the general sentiment that Fallout 76 has a nice community. But would I urge others to become a part of it? I would if the things you liked from the most recent Fallout games were exploration, looting, and, from Fallout 4, building. The game’s overarching plot is currently lacking, though that may change with its upcoming Wasterlanders expansion which promises to bring NPCs back into the mix. I wouldn’t if you don’t like survival games. Having to worry about eating, drinking, radiation levels, and contracting diseases is a pain in the neck. These issues have hampered several of my sessions with the game. Not enough to make me stop playing, so I guess that says something.

As an MMO, I’m not sure where Fallout 76 falls on that scale. Comparing it to my only other MMO experience, Neverwinter, Fallout 76 feels very awkward and empty. Neverwinter offers quite a lot of guidance to players. Quests are clearly spelled out. Leveling makes sense. The controls work very well. The menu system is big but easy to grasp. In Fallout 76, you’re plopped into a big, boiling stew of wilderness that’s lacking in ingredients. There’s no clear sense of direction, how to effectively level up, how to find the things you need, or where not to go so that you don’t end up instantly dead. Certainly you learn by doing, and helpful players are there if you stumble across them, but getting over that steep curve isn’t very appealing at first. The controls remain clumsy, especially when trying to use the wheels attached to the d-pad to change weapons, use items, or make use of the “emotes.” Inventory management remains a thing, and it’s not terrible using your Pip-Boy. While the game doesn’t tell you that you are over-encumbered and cannot run!, you still have to be cognizant of your carry capacity, which can vary over the course of play. I do like Fallout 76’s card system for perks, but I’ve not gotten very deep into utilizing different card scheme. Since you can’t pause the game, spending tons of time managing oneself isn’t always an available option.

While Fallout 76, may not be the “Fallout 5” that everyone was hoping for, it does offer a reasonably good, if different, Fallout experience. It’s pretty clear that Bethesda is well-invested in the game, so hopefully the improvements and expansions will keep on coming. In the meantime, if you happen to see Amelya around Appalachia, send a “hello” emote. Or not. I can never remember how to bring up them up, myself.