When BioShock was first described to me way back when it was first released in 2007, the words “survival” and “horror” were emphasized. Me being the chicken that I am, I subsequently avoided the game for a very long time. As if the “horror” tag wasn’t enough, the fact that this game, or any game, supposedly required me to keep my wits about me with limited resources in a world filled with terror, was more than enough to make me say to it No. Thank. You.

Fast forward ten years to me finally playing the game in 2017 and discovering that I couldn’t have been more wrong. Well, wrong about not playing it. Because I should have, much sooner.

As for the “horror” scheme, while I’ll grant that such is very subjective, there are undoubtedly scary elements in BioShock, starting off with its very opening moments. Monsters and zombies aside, waking up in the game as the only survivor (named Jack) of a horrific plane wreck, stranded in the middle of the ocean, is pretty frightening. After somehow wading to a nearby lighthouse, discovering a strange transportation device (the bathysphere), and taking it wherever it leads, thus begins Jack’s descent into the unknown. He finds himself in Rapture, a place once wrought with charm, beauty, and decadence.  Now, it is in utter ruins, overrun with a variety of deranged, weapon-wielding characters, and overseen by a mad visionary named Andrew Ryan. As is surviving wasn’t enough, Jack eventually discovers that his past isn’t what he thought it was. With said plot twist now twisting, Jack takes a chilling deep dive into genetics, morality, and ethics.

It’s all pretty heady stuff, for a video game. And my mind still reels at just how masterfully BioShock’s story unfolded. The reveal of Jack’s reason for being is hardly BOO! SCARY!; it’s personally tragic and questions what it means to be human. When you get right down to considering the meaning and brevity of life, it can conjure up some rather petrifying feelings. For myself, I quite literally sat in shock for several moments after Jack and Ryan’s revealing conversation, quite anxious at the thought of moving forward. 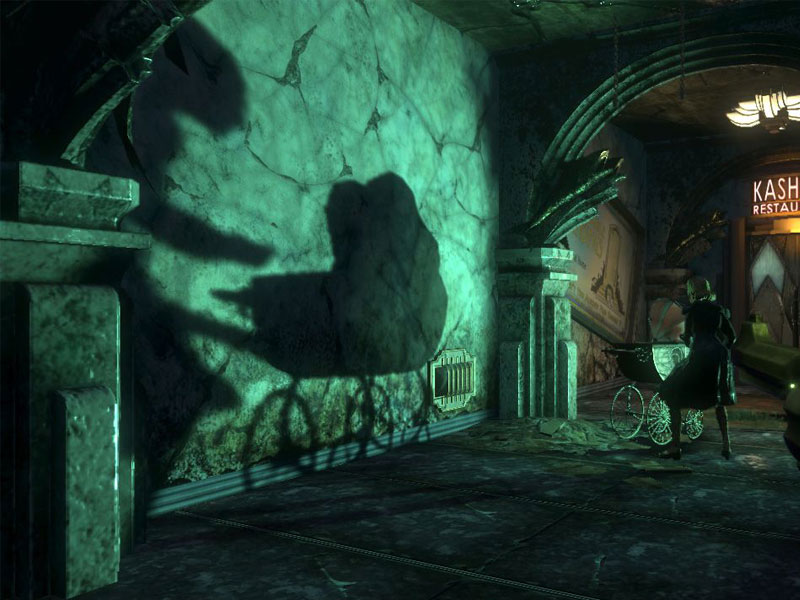 While BioShock does a beautiful job of slowly instilling an internal sense of fear, it’s outwardly forbidding, as well. Just look at the decayed state of Rapture – abandoned rooms adorned with moldering décor, evidence of horrific deeds, and dark, creepy secrets. As well, consider the mad Splicers, the game’s primary enemies, what with their mutated limbs, distorted (sometimes masked) faces, and crazed actions. Unpredictability is daunting, and the Splicers are nothing if not erratic. In stark contrast, are the Big Daddies and their matching Little Sisters. While Splicers seemingly come out of nowhere, you know when a Big Daddy is nearby. Dread rises in your gut as you wait for the impending battle. The end of a Big Daddy is only the beginning, as then you must decide what to do with its Little Sister – save or…not. While death might be seen as respite, and Jack needs their life-saving essence, taking such action while watching them cower in fear is both physically and mentally unnerving, to say the least.

While there are plenty of very good and very blatant horror games on the market, BioShock’s subtle turn towards the genre is remarkably effective, and it was certainly enough to scare this player. While being chased by serial killers at summer camp, mobbed by hordes of unstoppable monsters in a mall, or squaring off against underworld demons in an apocalyptic fantasy are certainly unpleasant situations, sometimes the worst fears are the one we impose upon ourselves. I, for one, was unprepared for BioShock’s ghastly and provocative examination of the human condition. Any fears that followed were borne out of the fact that I was just as duped as Jack in believing his purpose. Coming to terms with feeling that vulnerable to deception was far scarier than facing the Big Daddies and Splicers combined.